We made it to the 32nd issue! Thank you to everyone who read last week’s issue ❤️

I just realized this yesterday but… on top of it being the 32nd issue, it’s also my 32nd birthday today 😊 I think it’s kind of fun that both 32s are falling on the same day 😛

Wessley is the creator of Everlog and LEDit. Everlog is a lightweight and elegant journal and diary app that helps you reflect on your life. LEDit turns your iPhone/iPad into awesome ticker display. Wessley has done a fantastic job at making it as easy as possible to journal with Everlog. Everlog is a has a simple premise of being fast and unclottered. It’s the perfect app for writing your thoughts on your iPhone, iPad, and Mac with the ability to iCloud sync. Everlog also offers the ability to have reflections in your journals enteries. Everlog is Wessley’s newest app but you should also make sure to check out his first app LEDit! LEDit was released in 2009 and has soon some pretty cool uses over the years from classrooms to international events 🤯 Make sure to checkout Everlog and LEDit whenever you can! Wessley has done some amazing work and it shouldn’t go unnoticed 😌 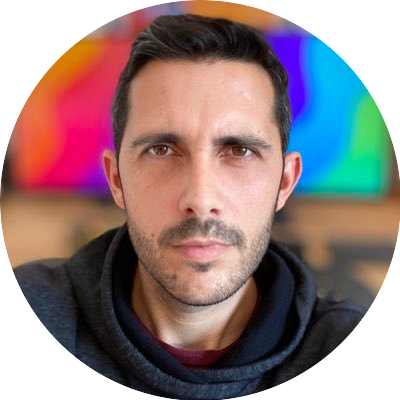 iOS developer and designer and creator of Everlog

1) What is your name? Where do you live (city or general area)? (I’d like to create a world map of all the indie devs that get showcased)

My name is Wessley Roche. I live on the Mediterranean coast of Spain, near a small town called Jávea.

Education-wise, all I know about development is pretty much self-taught. I signed up for a prepress degree when I finished high school. There, among other things, I learned the basics of Photoshop, Freehand and Flash. That sparked my interest in design in general and website design in particular. And that, in turn, attracted me to programming (PHP, Javascript, …). So I became a web developer.

Many years of web development later, I remember watching the keynote where the App Store was announced and thinking to myself “I have to learn how to make apps for the iPhone”. So I went and signed up for the App Store Developer Program and learned my way into iOS app development. The rest is history 😊.

Outside of tech, I love mountain biking. I try to ride at least twice a week. It helps me clear my mind. Oh, and free diving in the summer months.

Yes! Ever since releasing LEDit (my first iOS app) back in 2009 and quickly being able to make a living from it. Things were so much easier back then.

What got me interested in app development was the iPhone and, in particular, the App Store. I fell in love with the idea of just creating apps and being able to sell them without the need of setting up a website, a payment processor, manage software licenses, etc.

As someone who works at home, I’ve always struggled so much with schedules. Before being a dad, I used to work until late at night, even on Saturdays and Sundays. Having a kid has forced me to compartmentalize my time to make the most out of the little time I have to work.

The change that made the most impact was waking up at 5am. That couple of hours without distractions before my daughter wakes up has proved to be incredibly valuable.

6) Everlog - I love love love the simplicity of Everlog! I knew exactly how what to do and how to use Everlog when I opened it for the first time. What’s the story behind Everlog’s creation? Where did you draw your inspirations from?

Thank you! 😊. Everlog was born out of my own need for a journal app. I had been using other journaling apps but none fit with my journaling style. One day I was browsing Twitter and thought: Wouldn’t it be great to have your own private Twitter timeline? And that’s what got me started.

I also loved the handiness of the calendar component in Fantastical, so I thought I’d do something similar with Everlog.

7) Everlog - Congrats on your recent release of Everlog for macOS! This app is so pretty 😍 It looks like it belongs directly with the OS. What was your experience like porting Everlog from iOS to macOS? Did you learn anything fun along the way?

Oh boy. I had been putting this off for so long because when I first checked the Catalyst checkbox in Xcode and ran the app it looked so different from what one would expect a Mac app to look like. I thought it would take forever to adapt the interface. But in the end it only took about a week and it was totally worth it!

8) Everlog - I’m on the Everlog TestFlight and I was so excited to see photo support come through in a recent update. This is such a great addition! I end up documenting a lot of my life through photos (mainly my dog and my son) and this new feature is going to be great. Was this something you had a planned from the start or taken as a request from users? How do you expect most users to use photos? How will you be using photos? 😊

Even though I very rarely add photos to my journal entries, I knew I’d have to support photo attachments at some point, so I’ve been planning for it from the beginning. It’s been the number one request from users, so I’m happy to release it soon.

Overall I think it’s going to be the greatest addition to Everlog, and I hope it will help catching up to the more popular journal apps out there.

Oh and thank you for helping with the beta 🙌

9) Everlog - Most people might know by now that I have a crazy love for nicely designed app icons. Everlog’s icon is so great 🙌 The feather/quill shows that its a writing app but also a lightweight writing app. How many different icons variations did you have to go through to find this icon? What were your other versions if you had any? 😇

That’s a great question! I don’t know about others but when I design stuff, I iterate A LOT. I duplicate, make changes, duplicate again, make more changes, and so on until I’m 100% happy with the results. Sometimes, I will run out of ideas and just let it sit for weeks, until I feel inspired to work on it again. All in all, it took me exactly 180 iterations to get to the final icon of Everlog. I posted a tweet about it a while ago, if you’re curious:

This is how many iterations it took me to get to the final app icon for @everlogJournal. Should I see a therapist? 😝 pic.twitter.com/AYvYfqDmBW

PS. I still make small tweaks to the icon from time to time, I just can’t help it.

10) LEDit - This is such a fun app! I hate to admit that I just downloaded it a few weeks ago but I kind of wish I had this since I first got a smart phone 😛 What inspired you to create LEDit? Was it just a meant as a fun project or did you plan to take over the LED banner world like you did? 😁

LEDit was the app I decided to make to learn iOS development. I’ve always liked retro LED matrix screens and thought it would be fun, and relatively easy, to make an app that would mimic that. I never thought it would become so popular and I’m so grateful it did!

11) LEDit - Have you ever heard from you users or seen any great uses of LEDit out in the wild?

It’s always fun to read the LEDit’s reviews because of the creative uses people make of it. From teachers using it in class with their students, to “gently tell the person with the zipper open”.

But the most memorable one was during the London 2012 Olympics Closing Ceremony. Some athletes used the app to say hi from the crowd, which made LEDit climb to the top of the App Store charts. It was quite a pleasant surprise.

12) Everlog and LEDit - What’s next for Everlog and/or LEDit? Any fun future features you can share with us?

Right now I’m focusing 100% of my energy towards Everlog, as I think it has the most potential to succeed. I’m working hard on adding support for photos. It seems like a trivial thing to add but there are a lot of ramifications with the interface, syncing, exporting and importing from other journaling apps, and so on.

After that, I have a 100+ list of things I want to do to improve it (including tags, which I also get a lot of requests for). I’m so motivated that I sometimes wake up at 4am with new ideas and I can’t help but get up and work on them.

For me the hardest part is having to do my own marketing and PR. I believe it’s one of the most important things you can do, but I dread it so much, I keep putting it off for later and always end up not doing anything 🙄.

The best part for sure is being able to work on the projects you’re most passionate about and sharing them with the world.

14) Is there anything else you’d like to tell the indie dev community about you? (there is probably more i could have poked at but I’m still learning over here 😇)

Nothing really. I’d just like to thank everyone in the iOS indie dev community for their support. There aren’t many devs in my area and it means the world to share my experiences with like-minded people. ❤️❤️❤️

15) Do you have any other indie devs that readers should follow / lookout for?

For inspiration from other indies: