We made it to Issue #125! Thank you to everyone who read last week’s issue ❤️ 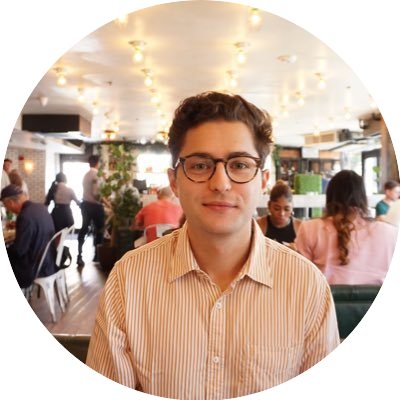 iOS Developer at Loom and creator of LineupSupply

I grew up in Arizona and studied computer science at ASU. After graduating I moved up to Seattle to work at Amazon and now I work remotely for Loom on their iOS app. I’ve always been an iOS developer - started making apps for fun in college and continued that into my career. Outside of working on apps you can find me snowboarding this time of year 🏂 (shoutout to Slopes).

Not really. The online community of iOS devs that work on apps by themselves is really great and helpful, but it’s not something I’ve called myself 🤷

In college a friend of mine showed me an app he made. The idea was some dumb college thing, alerting your friends that cops showed up to a party, but it really opened me up to the world of making apps. We worked on a couple projects together after that - a contacts swapping app and an app for crowdsourcing Pokémon locations in Pokémon Go. That experience got me hooked and I’ve been doing it ever since.

The amount of my time that I give to working on apps outside of my normal job fluctuates, but lately I’ve been focused on it pretty solely. There’s always tradeoffs, so I gravitate towards what I’m most interested in at the time. Right now that’s LineupSupply.

6) LineupSupply - This is super dope! LineupSupply is a really neat way for me to import playlists into Spotify and also share what I’ve been listening to. ☺️ I’m so happy I just recently changed back from Apple Music to Spotify so that I could give LineupSupply some good use! When did you start working on it and what were your initial goals?

I started this year, back in June or July. The first version went out at the end of August right before the iOS 16 release. At the time the only feature it had was the Image option - where you provide an image that has artist names in it and the app makes a playlist of those artists.

I got the idea because I was going to a music festival and wanted a playlist of the lineup. There wasn’t any service for this that I could find, besides doing it manually, so my goal was to get something that worked and to actually ship it. At the time I wasn’t sure if the concept would even be possible with the Spotify and Vision APIs.

7) LineupSupply - Congrats on your huge TechCrunch article and also getting into Top Charts in the App Store! What did that all feel like? Did you ever expect that anything like this would happen? Did you learn anything cool from that experience?

Thanks, ya that was a fun week. It’s a pretty weird feeling to read a TechCrunch article about something you made. Now that I’ve hit top charts my goal is to hit it again and go even higher. Thats a never ending chase for sure though.

Something I learned is that if you’re trying to make money on the app store, you can’t be afraid to show your paywall. It’s so obvious, and I thought I understood it, but until I went through the experience myself I didn’t truly grasp it. People will download an app and pay up front for the lifetime purchase within 60 seconds of downloading it, without even testing it out first, when the paywall is completely optional. I think that as iOS developers, that’s mind-blowing to us because that’s not how we personally use apps. We know the patterns, we see the close button or the skip button and dodge the paywall for as long as possible. I know we all want to provide the best experience in our apps, but honestly, sometimes you have to be annoying and show that paywall on app open because it works.

8) LineupSupply - LineupSupply has two cool ways to import songs into Spotify playlists! One is through taking a picture of a musical festival poster and one is through using audio from TikToks and other videos. Are you able to share how these are technically done and what challenges you’ve faced? Also… does LineupSupply work on the When We Were Young posts? 😇 There are a lot of artists on that one!

On the images of music festival posters - This uses Apple’s VisionKit to recognize text in the image. It works pretty well on average, but music festival posters are a unique beast. There’s so many variations of fonts, text arrangements, random bs in the poster like sponsor names, dates, etc. That was definitely the hardest part of that feature and it’s not perfect. A big part of it is also balancing the UX of letting users decide things (like adding/removing artists that are detected) vs the app making decisions for the user to speed up the flow of making a playlist. I’d love to come back and refine it more in the future, but I think time is better spent on new ways to make playlists for now. When We Were Young is one of those edge case posters where the designers went crazy with the font styles. Maybe with iOS 17 I’ll get lucky and Apple will solve the problem for me in VisionKit.

For the video feature - This essentially does a long form Shazam on the video. I have experience with video players from my day job and the Shazam API is pretty straightforward so it wasn’t too bad. It’s the least popular form of making a playlist right now, but I like how unique it is.

9) LineupSupply - The Rewind feature is so cool! I always love the Spotify Unwrapped at the end of the year to see what I’ve been listening to but I’m not always that patient. I like that I’m able to use LineupSupply to do this on a smaller interval and save my playlists so I can see my historical tastes 😁 No real question here but have this 🏆 for having such a cool feature! And here is my last 4 weeks if anybody is curious 😊 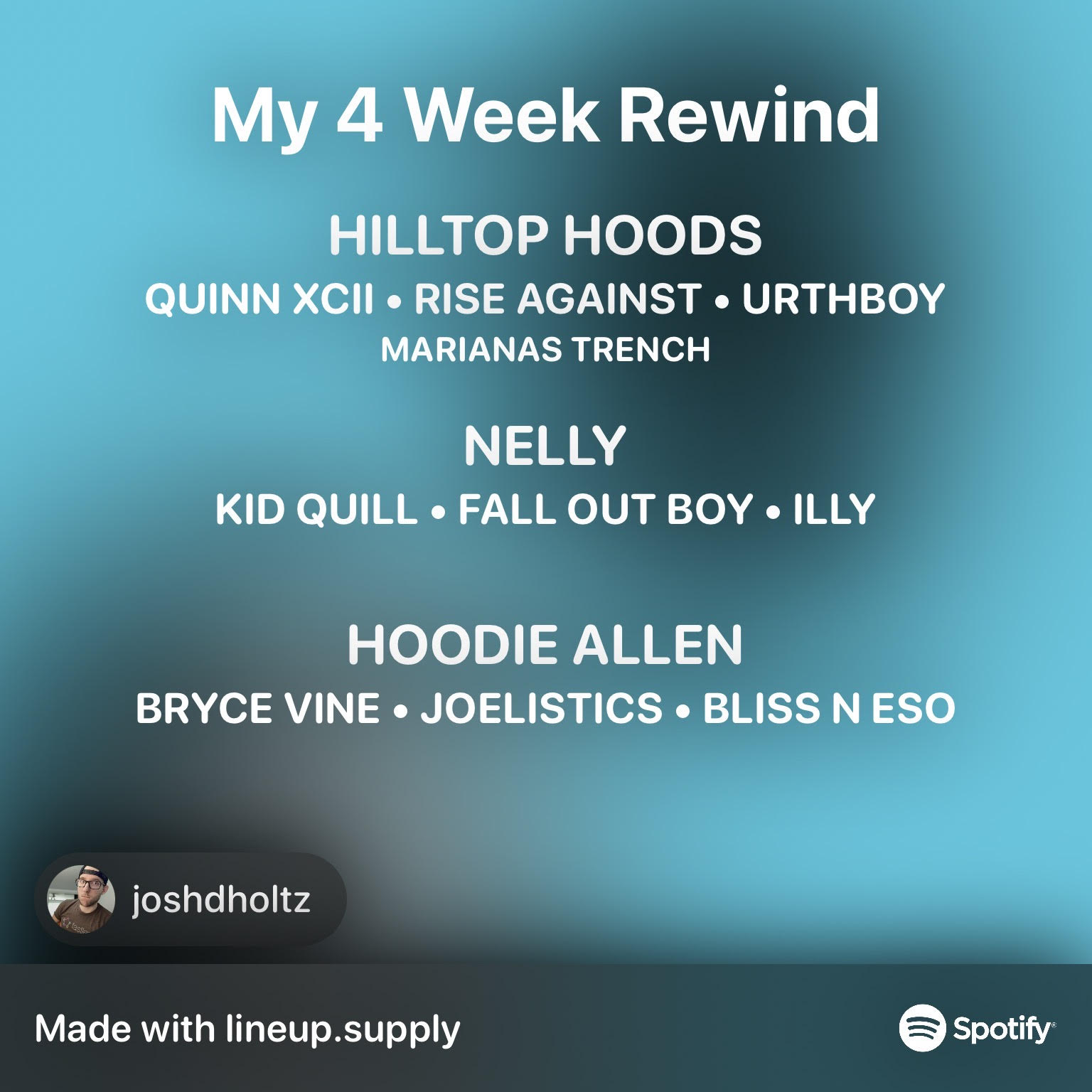 Love me some Rise Against

10) LineupSupply - What are your experiences on working with the Spotify API? I have an app I’m thinking about adding in Spotify support but I’ve never worked with it so I’m hesitant 😛 Have you hit any weird limitations or issues that you had to come up with a creative solution to work around?

I could complain about some things and wish for more endpoints, but I feel like I shouldn’t since it’s generous that Spotify provides the API that they do. There’s some really sick recommendation APIs available and now that I have a solid foundation in my codebase I can iterate on it quickly. They do make you go through an approval process to get a production API key though and my pro tip would be to start that process as early as you can. It can take awhile.

11) LineupSupply - What’s next?! Do you have any future features that you can share with us?

I have a huge backlog of ideas for different ways to make a playlist. I’ve come to realize that the way we make playlists hasn’t been innovated on since they were first created. Music services have been focused on using their tech to recommend already-created playlists to their users, but actually creating a playlist yourself is still a boring tedious process. I’m looking to bridge that gap and make it a more collaborative experience between the person making a playlist and the recommendation algorithms.

I will drop that Apple Music support is coming in my next big release. I’m aiming for early January - subscribe for updates here.

The hardest part is finding the time. I have so much I want to build, but have to be picky about what to work on since I don’t work on this full-time.

The most fun part is definitely talking to users. I recently had a call with a team that runs a music festival and they’re using LineupSupply to create the official lineup playlist for their event. It’s always a rewarding experience. If you use the app and want to chat, don’t be afraid to reach out.

When I was first getting started with iOS development I spent a ton of time on swiftbysundell, so I owe a shoutout to John Sundell for sure. David Barnard was also really kind to me when I launched LineupSupply and his podcast is super informative for people making apps. Other people putting out cool iOS stuff are Jibran, Zibo, Tommy, and Ben.

World Cup Bar Newly Released
Follow the World Cup directly from you Mac with this little menu bar app! In one click you can see today's live score and scheduled matches, yesterday's results if you missed it and tomorrow's schedule. Perfect while working.
Spot-Trade Tracker Newly Released
A central repository for all of your trading. Collate stock, crypto, commodity and forex transactions, protecting yourself from overspending by setting realistic targets and and measuring profit over time, whilst making use of Swift charts for extra insight.
Letter Linker Updated
Added themes for the seasons, and a few easter eggs if you're into that (hint: custom games text field also accepts strings like "blackbox"). I recommend the winter theme and make sure to turn on animated backgrounds!
LineupSupply - Playlist Maker Updated
You can now create personalized playlists featuring your top artists and a shareable cover image that shows your artists as a music festival lineup