We made it to Issue #105! Thank you to everyone who read last week’s issue ❤️

Dave is the creator of GoVJ. GoVJ enables everyone to mix video live at their party or event. Turn your iPhone or iPad into a fully fledged video mixer! It allows you to mix photos and videos, add effects to them, and control place back speed. The filters include blur, divide, edge detect, fish eye, fish eye RGB, heat, invert, kaleidoscope, mirror, monochrome, pixellate, RGB levels, shift RGB, toon shading, tracing, and vignette 🤯 You can even control the effects live! I’m not VJ (video jokey) expert but GoVJ comes with a bunch of demo content and I had such a fun time playing with them. I don’t think I’ll be getting any VJing gigs soon but you should definitely checkout GoVJ if you are a VJ or want to get into VJing! 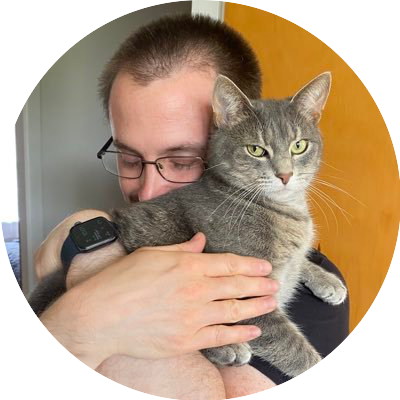 iOS Coach and creator of GoVJ

I live in Te Whanganui-a-tara in Aotearoa, otherwise known as Wellington, New Zealand. I emigrated here from the UK in 2017.

I’m a self-taught iOS developer, for the last nearly 8 years. I quit a 14-year career in customer insight analytics to become an iOS dev back in 2016, and I’ve never looked back.

I currently work as an iOS Coach, where I have a team of iOS developers that I look after for a company called Snapper Services. This means I guide how we do iOS development (design patterns, code styles, processes etc), I pair-program and help my team get past any problems they may be having. I also kick off any new apps or proof of concept work for the company.

Outside of the day job, I make my own apps. I have a podcast called Waiting For Review that I record every fortnight with my good friend Daniel Jilg.

It’s fair to say a lot of my free time is also devoted to iOS development. I sometimes write, or make music, although not in any seriousness. When I’m not in front of the computer I like to get out to the beaches and into nature where I live.

Yes, although how seriously I take it varies from time to time. I definitely categorise my current indie app as a hobby, even though I’d like them to become much more one day.

I used to mix video in nightclubs way back when between 2004-2007 or so before my first child was born. Back then I’d take a lot of equipment to events with me in flight cases, a hardware video mixer, DVD Players, a full computer even at one stage with a small Shuttle PC and an external monitor.

When the iPad was released, I looked at that beautiful slab of touch screen and thought “Aha, I could make a video mixing app and it would be super portable!”

That idea kept gnawing at me until eventually, I decided to start learning. I bought the Big Nerd Ranch Guide to iOS development and started learning Objective C and UIKit. Over the next couple of years, I taught myself OpenGL programming, AVFoundation, and all the other things I needed to make the app I was dreaming about, ultimately releasing it in 2015.

So, seriously, it’s a bit of a juggle. I tend to get an afternoon or so across most weekends where I can dive into things, and then otherwise it’s scraps of time across my evenings. I don’t tend to watch a lot of TV, and I get really hyper-focused when an app is coming together, so essentially indie dev is my hobby and downtime.

The less time I spend in Xcode in my day job, when I’m doing managerial work, the more ‘gas in the tank’ I seem to have for my indie work on evenings. If I’m coding all day though, the last thing I want to look at is Xcode in the evening.

6) GoVJ - Congrats on your recent release of GoVJ 2.0! I was super intrigued when I first saw GoVJ. I looked so fun and fresh but I also had no idea what a VJ (video jokey) does? Would you be able to explain what VJs do and how the idea for GoVJ got started?

OK, so a VJ or “Video Jockey” is someone who mixes video in real-time for the type of visuals that you’ll see projected on stages, or at events, behind musicians and DJs. A VJ will typically have a laptop and a bunch of other associated gear with them, and they’ll use things like midi controllers to give them real control over everything they’re running. A lot of VJs mix the video manually, to the beat, getting themselves in sync with the music rather than relying on beat detection or that sort of thing.

I explained earlier how the idea of a VJ app was the bug that led to me becoming an iOS developer, but the idea is centred around the premise that you could do all of this from a super portable device. Anyone with an iPad or iPhone can load up GoVJ, start mixing some video and can then send that to a TV or projector. Professional VJs have used GoVJ as an extra input into their existing professional rigs and mixers too!

7) GoVJ - Your GoVJ 2.0 release video on YouTube was insanely good! Did you make this yourself? How was this made? I want one like this for my apps 😁 I think I watched it around 10 times.

Ah, thank you, Josh! So the promo video consists of two layers of video. The background is the video being mixed by the app, and the foreground is a device frame with the app showing what’s going on.

I screen-recorded myself playing with the app while I played the music I used. I then placed this in Rotato and did all the device frames and animation you can see with that.

For the background, I used a secret recording feature that is still in Beta for GoVJ and recorded my VJ mixing at the same time as the screen recording.

Finally, I brought it all together in Motion to composite the background and the Rotato animation together.

8) GoVJ - I loved the demo content that GoVJ comes with! It was such a good idea. As mentioned earlier, I didn’t know what VJing was so having the demo content was super nice to have 😅 How do VJs obtain the videos they want to use? What kind of videos are best to use?

VJ’s tend to fall into one of two camps. They’re either creative artists who create their content via 3D animation packages like After Effects or even Blender. Otherwise, they’re more like DJs and they purchase content from some of the major video loops websites online. Both categories may also use things like generative video, where different plugins produce different patterns, and they’ll use these on their laptop with VJ software.

Suffice to say, having a video loop “store” and a generative video section for the app, are both ideas I’m toying with as a next step to give more to new VJs to just get going.

9) GoVJ - There are soooo many effects that you can add to the videos! Are there some standard effects that VJs need? What do you make and test these effects?! This kind of stuff does not make sense to me 🙈

Having come from the hobby, albeit nearly 18 years ago now, I have a feel for what I know I liked to play with from the VJ software at the time. Otherwise, I’ve checked out Mac or Windows VJ software and had a look at the effects there that I like the most. Some of the effects in the app were Bob Ross-style “happy accidents” that came as a result of trying to build something else too.

For GoVJ 2.0 I use Core Image filters, which are essentially just a wrapper around a Metal Shader. I’ve had to learn the Metal Shader language to do this, but I’d already had to learn OpenGL ES beforehand for GoVJ 1.0 so it wasn’t that big a jump.

I know just enough to be dangerous, and not enough to be an expert. I tend to take a look at example code from things like ShaderToy to bring an idea together.

GoVJ 2 was a complete rebuild and I wanted to make sure my code base was rock solid. One of the most difficult things is balancing that desire for a strong codebase, with the fact I’m writing it in small scraps of time. I make notes in Bear and tasks in Trello to keep track of where I am.

The most fun aspect is being able to just sit there with some music playing and mix video with an app I made. These days my old gigging flight cases rest on a shelf gathering dust, but I could pick up my iPad and HDMI adaptor and go play a small gig with a single screen, through my app.

11) GoVJ - What’s next?! Can you share any future features with us?

Next up is that super secret beta recording feature I mentioned that I used for making the promo video. I’m still figuring out the UI for it and testing it out myself, but it’s something users want.

After that, I’ll be looking at streamlining the interface for iPad and adding controller support for MIDI devices and gaming joypads.

Balancing time is the hardest thing.

The most fun is being able to get deep into a problem, fix it, come back up for air and then look at what you’ve created. I suspect a large part of GoVJ has been built by the coffee I’ve drunk and the music I’ve listened to in those deep coding sessions!

I love recording my podcast, and getting feedback from other indie devs - please check it out at https://www.waitingforreview.com

I would say, Aaron Pearce, developer of HomeRun, HomeCam, and HomePass for HomeKit https://www.aaronpearce.com. He’s an awesome indie developer and a really friendly and great guy.

lil bucket - Note To Self Remind Bookmark Newly Released
The fastest notes app for your thoughts. Organize and recall notes, bookmark, links seamlessly. lil bucket helps you organise your content with folders, Whether you like saving loads of links, taking notes lil bucket is for you.